What is the Universe calling you to do? Are you answering that call? If not? Why not? I ask these questions because I need to be asking them of myself.

Periodically, life circumstances allow me to be reinvented. (It’s part of the privilege that comes with being male, white, middle-class, and educated.) I’ll again find myself at that Robert Frost place where, “two roads are diverging into a wood.” Sometimes I’ve taken the “one less traveled by” and it “has made all the difference” and other times not so much. It hasn’t really mattered which road I took.

A few years ago after I was forced out of a congregation for having reported the suspected abuse of a child, I was at what seemed like the same fork in the road and once again had to make a decision. I knew that place. It was familiar. I knew I was supposed to take the less traveled road, but when I looked at it I could barely make it out. If I hadn’t been forced to stop on my journey I might not have even seen it. But I knew it was there. God had brought me to that place before. It’s a place of calling. If I had turned off the more traveled road that I’d been on for a few years and set out upon the other one, it would have been a challenge to even discern my way. I don’t like that. I like to walk on a smooth, well-delineated path, not one that is uneven and barely marked.

But I knew I was supposed to take it. Six years earlier I’d heard loudly and clearly the ministry that God was calling me to create. But then, and each time since, I’d not answered that call. I did other things instead. Sure, they were worthwhile and in service to God, but they weren’t what I was being called to do.

Maybe you can relate to that. Perhaps, you too have balked at or shied away from what you knew you were being called to do. We’re not alone. In the first book of Samuel in the Hebrew Scriptures someone else was in the same situation: Saul.

Here’s a little background: the people of the land of Israel had prevailed upon Samuel, the last of the judges and first of the prophets, to find someone to rule over them as king. (“..we are determined to have a king over us, so that we also may be like other nations, and that our king may govern us and go out before us and fight our battles.”) God consented and told Samuel where to find this king. Turns out he was this tall handsome guy from a humble family and tribe. Samuel told him that God wanted him to be king over the Israelites and then told him what would transpire in the next week so he would know that it was God who was calling him.

When the time came to present Saul to the people in order to be crowned King nobody could find him. Turns out he had hidden himself “among the stuff” as it says in the King James translation or, in other translations, “among the baggage.” What a sight that must have been, this handsome young man who was a foot taller than everyone else hiding in his stuff—in his baggage. That’s me! And that might be you! Saul had been told who he was to become and what he was to do, and even though he had seemingly accepted this new role, when the time came to act, he went and hid. He just wasn’t up to it and took refuge in what was familiar to him—all that stuff. 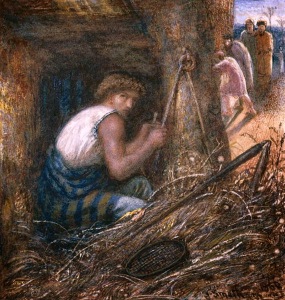 Do you have baggage? Maybe like me, when I’m called to do something different, something that might make me uncomfortable or feel I’m not in control, I start to make excuses about why I can’t do it. Most of these excuses are based on fear—fear of the unknown, fear of failure, fear of being vulnerable. I worry that I won’t do it right, that it won’t be perfect, or that I’ll be judged and ridiculed if it isn’t. So I take refuge in my feelings of unworthiness, in the certainty of what is known, and in the safety of the familiar.

What’s your stuff? What’s keeping you from answering your call? In the scripture it says that God told the people where Saul was hiding and they found him and he was brought before all those who had assembled. What will it take for me to quit hiding and finally answer God’s call? What will it take for you to answer your call? For me, I’m not yet entirely sure, but I know it will take trust—trust that if I answer the call, God won’t let me down and will provide everything I need to create a new ministry. And I’ll have to find a way to truly believe in myself and know I’m worthy and deserving of being successful in a new ministry (whatever that means.)

I also have to ask for help. Maybe I’ll be asking you for help. Who knows? And you’ll ask me for help. Together we’ll come out from behind all our stuff and look at those roads less traveled, smile at each other, give a thumbs up, and take that first step. And you know what? Maybe this time it will make all the difference.

And Samuel called the people together unto the Lord to Mizpeh; And said unto the children of Israel, Thus saith the Lord God of Israel, I brought up Israel out of Egypt, and delivered you out of the hand of the Egyptians, and out of the hand of all kingdoms, and of them that oppressed you: And ye have this day rejected your God, who himself saved you out of all your adversities and your tribulations; and ye have said unto him, Nay, but set a king over us. Now therefore present yourselves before the Lord by your tribes, and by your thousands.

And when Samuel had caused all the tribes of Israel to come near, the tribe of Benjamin was taken. When he had caused the tribe of Benjamin to come near by their families, the family of Matri was taken, and Saul the son of Kish was taken: and when they sought him, he could not be found. Therefore they enquired of the Lord further, if the man should yet come thither. And the Lord answered, Behold he hath hid himself among the stuff.

And they ran and fetched him thence: and when he stood among the people, he was higher than any of the people from his shoulders and upward. And Samuel said to all the people, See ye him whom the Lord hath chosen, that there is none like him among all the people? And all the people shouted, and said, God save the king.