A few years ago NASA scientists announced that the earth once had three moons—in addition to the one with which we are familiar, there were two smaller moons orbiting the earth, both of which were at some point destroyed. I’ve often imagined what it would be like, as it is with Jupiter and Saturn, if the Earth had many moons. I can picture a night sky in which there is a series of moonrises and of the moons being in varying phases on any given day. Conversely, I can imagine Earth, like Mercury and Venus, not having even one moon. How dark and lonely that would be for the people of Earth who orient themselves to the moon and are biologically affected by it waxing and waning.

I’ve thought of how the Earth and her moon are in relation to each other and how the gravity of the earth keeps the moon from being pulled out of its orbit. Throughout my life I’ve looked up at the moon and thought how since the dawn of time animals and people have seen this same moon, the realization of which makes me feel a deep kinship with those who have come before us. When I look at the moon at night, I envision people 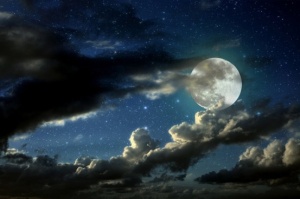 in other parts of the world where night has fallen also gazing upon her. Together in that moment we are focused on the same celestial body, the light of which extends down to each of us, connecting us to one another.

I can picture the Earth looking out at her moon. Oh, the tenderness she must feel for her little one who constantly circles her, reflecting the sun’s light down onto the places where there is darkness. What joy that must bring her, to be kept company by the moon—her child.

When the announcement came about there having once been two additional 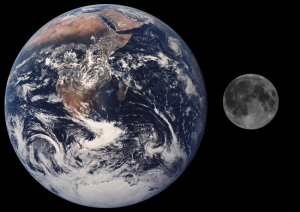 moons I imagined how devastating it must have been for her to lose them. I considered how deeply the Earth must feel their absence; how after so many millennia of being in relationship with them she must still ache for them and yearn to be with them once again.

I have read about people who, in utero had had a twin, but through some complication during pregnancy the other fetus died. The surviving twin, even though they had not known their twin outside the womb, experiences a sense of incompleteness and a yearning for reunion with their twin. There are also stories of twins who were separated as infants and grew up not knowing of their twin’s existence, but reported that they’d always had a sense of incompleteness and of a yearning for something they could not name.

So, too, was it was with the people of Judea who, after the destruction of the First Temple in Jerusalem, found themselves in exile in Babylon. They lamented the loss not only of the Temple and the rituals that could only be performed there, but the loss of their freedom and the sense of community they had while residing together in Zion, the

physical city of Jerusalem that had been given to them by God.

They mourned the loss of this connection to their Beloved. Psalm 137 is about their separation from that place where they had lived in covenant with God and one another. Deprived of Jerusalem and the temple, they lived for generations as displaced persons. They ached with longing when remembering that place. They wept remembering Zion.

As a child, I was able to escape our chaotic family life by wandering in the fields and pastures of our farm, taking refuge in Nature. I would smell the Earth and feel the wind and know that there was something—some force—out there from which I was separated; from which I had come and that I needed to return to in order not to hurt anymore, in order to feel safe and whole.

I’d stand with outstretched arms, my face to the sun, allowing the wind to blow over me and feel myself being lifted up and up until I was there. I didn’t consciously know what there was, but I felt it in my body, in my heart, in that aching to be there—that yearning for oneness—the yearning for Zion.

I know many people of all ages experience this. Most of us have some sort of empty spot that doesn’t get filled no matter what we do. But we do sense we are part of something greater. We probably can’t name what that is, but we yearn, usually unconsciously, to be 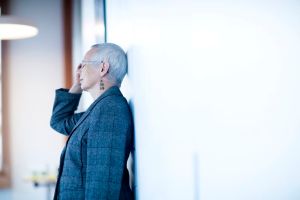 united with it. On some level we know that life is an illusion and that all our relationships, identities, material possessions, and the tasks we perform are but substitutes for that thing for which we are yearning. We remember on a soul level what it feels like to be one with God.

As we yearn for own Zion, we must remember that it isn’t out there (like I thought it was when I was a boy standing in the pasture), but rather is within us.

Luke 17:21 says: “Neither shall they say, Lo here! Or lo there! For, behold, the kingdom of God is within you.” If we quiet ourselves, subdue our egos, and turn our gaze within we’ll regain the feeling of wholeness that is our birthright. By being fully present in the moment and through loving one another we’ll find that our yearning and longing for Zion will become realized and then, finally, we will be reunited with all of that which we felt was lost.

We sat by the waters of Babylon
And wept when we remembered Zion
Upon the bending willows there we hung our harps
For in our exile we were forced to utter words of
home—
Sing for us the songs of Zion
But it was a mockery
How could we sing our songs on strangers’ soil?

O daughters of Babylon!
In your actions are the seeds of your fall
And it will be a relief to see those seeds bear fruit
For what you have done
A relief when your dark sprouts and black flowers
Are dashed against the rock of faith