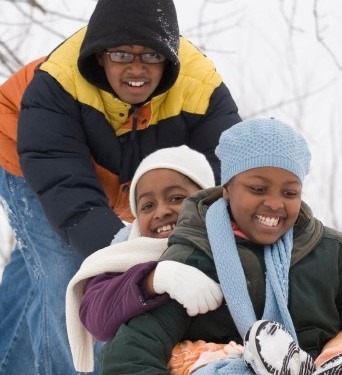 Winters in which there is an abundance of snow find many adults across the country complaining about having to shovel their driveways and sidewalks, but for millions of young people it’s a dream come true—a winter wonderland in which to romp and play.

One January after a heavy snowfall, I was drawn to my neighborhood playing field by the screams and laughter of the dozens of children playing there. I stopped to watch them, dressed in their colorful coats and boots, jumping and running through the snow with abandon, slowing down only long enough to make the snowballs they were using to build forts and snow people, or to be pulled by older kids or their guardians on sleds or pieces of cardboard. As one group of children was rounded up, and with great effort made to gather their things in order to head home, another group would materialize to take their place, their shrieks of delight upon entering the snowy paradise echoing across the field and down the narrow streets. I had thought that the departing kids would be glum and downcast for having been removed from that which had brought them such joy, but such was not the case. To a child, they were exhilarated—their faces radiant and shining.

Seeing this reminded of the verses in the book of Exodus where Moses comes down from Mount Sinai carrying the tablets with the Ten Commandments and “did not know that the skin of his face shone because he had been talking to God.” One might ask how this could possibly have anything to do with children playing in the snow, but it does. The abandon with which children enter into playtime, fully immersing themselves in the physical, mental, and emotional requirements of it, brings them to that place where the Source of Life, (God, if you will) resides. This unself-conscious interaction with pure Joy infuses them with Godliness; invigorates their bodies, minds, and souls; and makes their faces shine. And they do this without guile or an expectation that it will make them more spiritual.

In Yoga there are breathing exercises that are revitalizing and connect one to the Source of Life. One of these is called Kapalabhati. In Sankrit, Kapal means “forehead” and Bhati means “shining.” To practice Kapalabhati makes one shine, in the same way that Moses’ skin shone because of his interaction with God. The restorative properties of the prana (life force) cause one to emanate with that force which then surrounds one with Light and Love.

Do you ever notice when you or someone else is shining or radiant? Try to think of activities and practices that you know bring you to your own center, which is the place where the God within you resides, which then results in your countenance being lightened. In my experience and my observations of others, some of the things that do this are dancing, laughing, meditating, skiing, running, making love, singing, praying, and most importantly—playing!

Just as Moses’ face shone from having talked with God, and children’s faces shine from having through play been brought into God’s presence, may we all allow ourselves to enter into communion with the Holy One, so that we, too, can shine.

Moses came down from Mount Sinai. As he came down from the mountain with the two tablets of the covenant in his hand, Moses did not know that the skin of his face shone because he had been talking with God. When Aaron and all the Israelites saw Moses, the skin of his face was shining, and they were afraid to come near him. But Moses called to them; and Aaron and all the leaders of the congregation returned to him, and Moses spoke with them. Afterward all the Israelites came near, and he gave them in commandment all that the Lord had spoken with him on Mount Sinai. When Moses had finished speaking with them, he put a veil on his face; but whenever Moses went in before the Lord to speak with him, he would take the veil off, until he came out; and when he came out, and told the Israelites what he had been commanded, the Israelites would see the face of Moses, that the skin of his face was shining; and Moses would put the veil on his face again, until he went in to speak with him.