I wish to begin my introduction to you by writing of my spiritual pilgrimage, the basis for which was the religious identities and backgrounds of my parents and grandparents. My mother, a native of Germany, was born to an Evangelical father and a mother who had been baptized into Evangelicalism, but whose own mother was Jewish, something which I did not know until I was a young adult. My Swedish paternal grandmother and my Dutch paternal grandfather, both first generation Americans born in Iowa, were Methodist Episcopal and American Baptist respectively. In the northern Wisconsin farming community they settled with other European-Americans they built a country church which was served by circuit-riding preachers, usually Methodists.

That was the family church in which I was raised. On Sundays the twelve pews were filled with my extended family as well as some of the other farmers and their families from the surrounding community. My grandmother played the organ and my aunts taught Sunday school. It was wonderful. I felt loved and cherished by not only my family and the other congregants, but by the blond-haired, blue-eyed Jesus that looked down at me from above the altar. God was love. I do not recall ever hearing much about sin and damnation. Unlike many of my peers, I never felt judged or feared eternal damnation. I was baptized when I was in fifth grade, along with my sisters and my fat 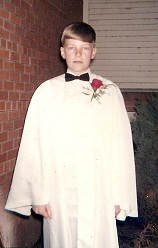 her, who had for some reason never chosen to be baptized. As a teenager I sang in the choir and was active in Methodist Youth Fellowship.

For a brief period when my parents were struggling in their marriage we were taken out of the Methodist Church and sent to the German Lutheran Church in town, although that didn’t work out and we went back to the Methodists. Our large farm had many beautiful pastures and woods and from an early age I would walk and play in them. It was there, too, that I felt the presence of the un-seen God—in the wind, the light, the swaying of the trees, and the coolness of the earth, something which comforted and sustained me.

For some reason, after graduation from high school and my enrolling in university, I stopped going to church. My parents, as I learned later in life, were actually agnostics, both having lost their faith during the war when my father was on the battlefield and my mother and her family lost everything they had in the bombings. (My Jewish relatives were killed in the camps and my only uncle, who was a gay artist and pacifist, was murdered.) My mother and father, like many parents, wanted us to be exposed to religion and also wished to avoid the social stigma of being non-church goers. For a brief time after first arriving at college I attended Mass at the chapel of the Roman Catholic hospital which was situated on the edge of campus.

After graduation from university I was introduced to the teachings of Raja Yoga as taught by Swami Rama of the Himalayas who was the revered guru of a group of devotees who had started the Meditation Center in Minneapolis. I studied all aspects of yoga and was taught to meditate by Swami Veda Bharati and became an initiate in the tradition, something which is akin to baptism. All of this was life changing. By centering myself through awareness of the breath I was led within myself and to that place where I felt the presence of God and experienced unity with all things. I was opened up not only to the universe but to myself, which is how I came to the realization that I was gay.

Having been raised in a challenging, but resilient family, I had from an early age begun to disassociate in order to survive. Everything stayed inside me. Of course, this was unhealthy and could not continue indefinitely without dire consequences. Through meditation I began to discover who I actually was, a process that continued then through many years of psychotherapy.

After moving to New York and beginning my theatre studies I started to neglect my yoga practices, something which continued as I began to tour in shows and to work out of town. It was then that I began to involve myself in New Age spirituality. It was during this time that I had a Near Death experience while being mugged. Right when one of the attackers pulled back his arm to run a large knife through me while another assailant was strangling me, I left my body and went to that place of peace, light, and all knowingness. God and the angels were at a bright opening waiting for me, as were people whom I loved and had known, but for whom I had no names. This experience has been a touchstone for me and is the cornerstone to my faith. Also during this time while making a retreat with the monks at the Abbey of Our Lady of Gethsemani in Kentucky I asked for a sign of the existence of God and His presence and was given it in a very dramatic fashion. This experience, too, has sustained me during my periods of doubt.

A few years later I entered into one of the darkest times of my life as I succumbed to the family disease of alcoholism. Because I was strong-willed I was able to study and to work, and then move back to New York and work in theatre, television, and film. But eventually the party was over and I found myself through the grace of God in Alcoholics Anonymous. It was by working the steps, being active in the fellowship, and more or le

ss being forced to find a Higher Power in order not to die, that I was reawakened to the presence of God. And then, through my work with other men in recovery, I began to sense a call to ministry, that same call which earlier in my life I had experienced as a longing to love God and to be of service.

During this time I made retreats at various monasteries and convents and was ministered to and taught by some wonderful men and women religious. I had a spiritual director who was a Franciscan monk, a member of the Order of Friars Minor Capuchin, who helped me not only with my discernment process, but also in the rediscovery of my Christian faith. I was accepted into the Actor’s Work Program sponsored by the Actors Fund of America where I underwent career counseling and testing, the results of which were that I should be a healthcare chaplain. In order to be a chaplain one needs to have a seminary education. I didn’t think that any seminary would accept me, not having been active in a Christian denomination. Through research I discovered the Unitarian Universalists and thought that might be a good fit. I was accepted into Meadville Lombard Theological School in Chicago where I began my studies and four years later graduated with honors and awarded a Master of Divinity.

During my time at seminary I took classes at the Institute for Pastoral Studies at Loyola University, the Roman Catholic diocesan seminary, and at the Episcopal and Lutheran seminaries. It was in those classes, sitting alongside Christian seminarians and being taught by inspired faculty, that my Christian faith began to solidify. Becoming reacquainted with Jesus through the study of the Gospels was life-affirming and invigorating. Even before leaving New York I had again begun to meditate and study the Vedic scriptures. I could never discover anything in Unitarian Universalism that resonated deeply within me other than the deeply satisfying experience of being in a covenantal community.

Here I was going to be ordained into the Unitarian Universalist ministry and I felt I wasn’t being genuine. My mentors helped me through this by stressing that Unitarian Universalists have different beliefs, but are united by a common history, so if I found my spiritual sustenance from the Gospels and identified as Christian that would be what I brought to my ministry and teaching. So I was then able to be ordained knowing that I would be ministering to people with varied beliefs and with no beliefs and that I could center myself within my deepening Christian faith.

for two years serving a Unitarian Universalist congregation as interim minister. As I prepared to enter into search for settled ministry I found myself ambivalent about serving a UU church given my identity as a Christian. I investigated the possibility of serving a UCC congregation and was in conversation with two different conference ministers who were supportive of this and who forwarded my UU search packet to three different congregations, although nothing came of it. I went ahead and entered the search process and was called to serve the Unitarian Universalist Church of Indianapolis.

In my two years there the church grew steadily with about three-fourths of the new people being young adults. However, with it came a conflict between the longer-time members, many of whom were charter members of the church and were atheist/humanists and the newer members/attendees as well as existing members of the church who identified as agnostic, spiritual, religious, Christian, or spiritual-but-not-religious. I was right in the center of the conflict, because it was I, the called and settled parish minister who brought God and Jesus back into the church. I had intended to do this slowly, but the more immersed I became in my studies of the Bible, especially the Gospels, and the more I preached on them, the more I realized that the Good News as proclaimed by Jesus Christ are at the center of my being and my call to ministry. I began to feel compelled to preach and teach as a progressive Christian minister and not as a Unitarian Universalist minister. It was at this time that I made the decision to seek privilege of call in the United Church of Christ so that I could fully and authentically be the pastor that God is calling me to be. It is important for me to align myself with and immerse myself in a denomination that is covenantal and non-creedal in nature.